In memory of the Confederate veterans who died at the Camp Chase Prison Camp - May they never be forgotten, let no man asperse the memory of the sacred dead. They were men who died for a cause they believed was worth fighting for and made the ultimate sacrifice.

As the name indicates, this site is maintained and written by SCV members. (Special thanks also to Pam Stanley). Although the War Between the States is long over, sometimes it can still stir emotional opinions. We hope you will find new and fresh information about Camp Chase and its cemetery contained within this site. It is our goal to present the facts and let the reader determine his or her own conclusions. Somewhere in between the North and the South lays the truth of that terrible ordeal. (1861-1865) 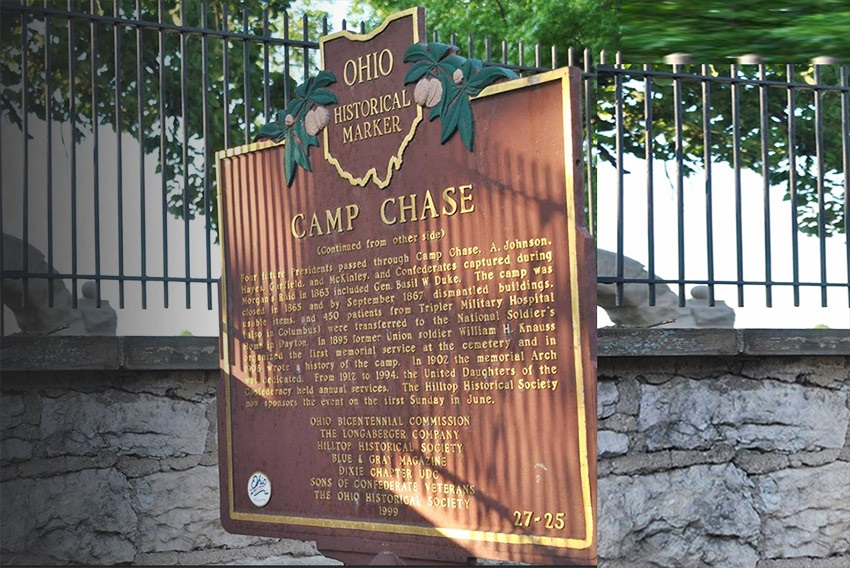 The wrought iron fence was made and installed by the William Bayley Company of Springfield, Ohio, who were successors of the Rogers Iron Company. 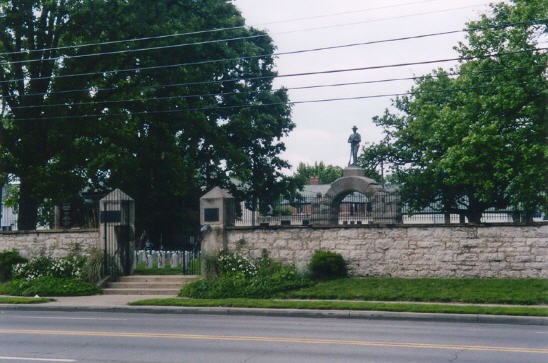 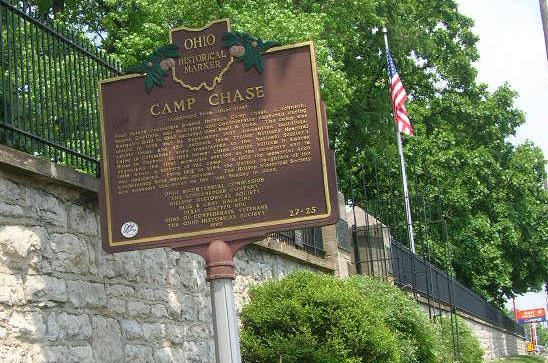 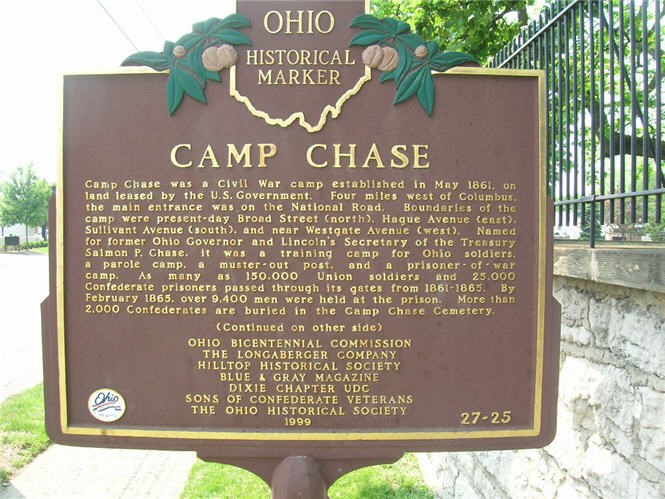 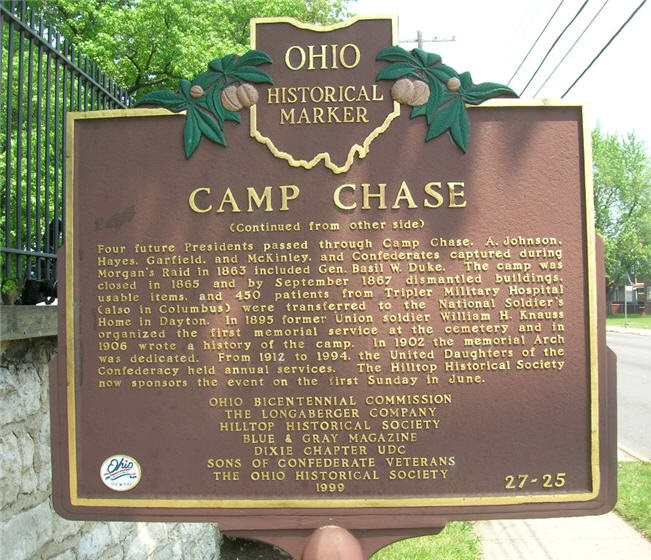 The contract was entered with the Company on December 10, 1909, by the Commissioner of Marking of Confederate Dead, War Department in care of William C. Oates. This would be the same William C. Oates that advanced his Alabama troops at Little Round Top at the Battle of Gettysburg on July 2, 1863. The government hired inspectors named Noble and Dole to verify the work had been done according to the contract. The following letter was sent to the War Department from Columbus, Ohio, on June 8, 1910. “Sir We certify that we have inspected the work done by the William Bayley Company, of Springfield, Ohio, under contract dated December 10, 1909, for erecting wrought iron fence on top of wall enclosing Camp Chase Confederate Cemetery, near Columbus, Ohio, together with the remolding of one drive gate and extending two stone gate posts, and find that the work has been completed in accordance with the contract, and that they are entitled to be paid, as per the terms of the contract as follows: 1141.50 lineal feet of fence, @ .47 cents per foot, $536.51, Remolding one drive gate $35.00, Extending Stone gate posts $70.00, Total $641.51
Signed Noble & Dole, Inspectors”

Camp Chase also served as a major western theatre parole camp for Union soldiers not yet exchanged under the Dix-Hill cartel. 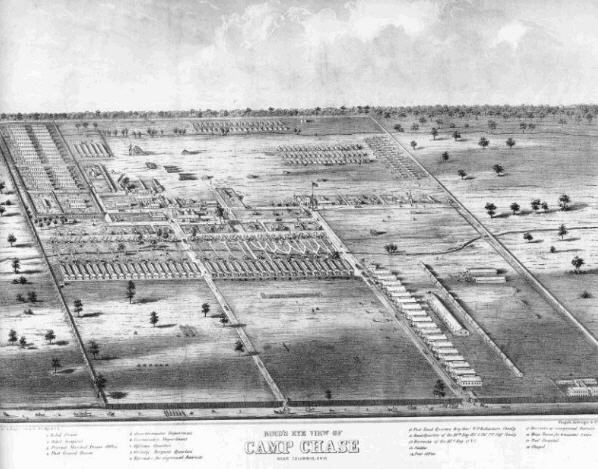 General Lew Wallace well after the war wrote an autobiography and visited Union paroled prisoners at Camp Chase in September 1862 and stated: "We are in the habit of speaking and thinking of Andersonville as the acme of horrors; it may have been so, indeed, but of this I am certain, Camp Chase was next to it, the difference being that Andersonville was a Confederate hell for the confinement of enemies taken in arms, while Camp Chase was a hell operated by the old government for friends and sworn supporters - its own children.” Ironically the future author of “Ben Hur” Major General Lew Wallace presided over the military tribunal of Major Heinrich Hartmann Wirz, aka Henry Wirz, of the infamous Camp Sumter, aka Andersonville. Major Wirz was found guilty of conspiracy and murder and hanged on November 10, 1865.

A cemetery was established at Camp Chase on August 1, 1863. 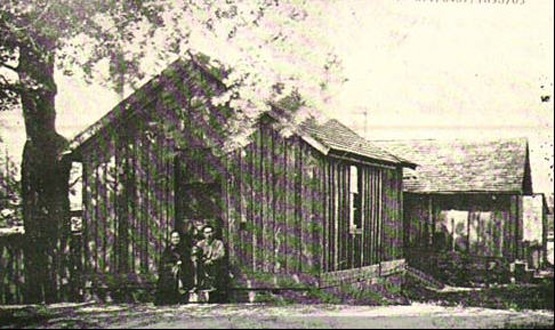 Many of the Confederate military dead who had been buried in the East City Cemetery prior to the establishment of the Camp Chase Cemetery were re-interred back to the Camp Chase Cemetery in May of 1869 by Agent Irving of the United States Quartermasters Department. They were buried under wooden markers in a plot surrounded by a low fence that had been part of the Camp Chase buildings. When the war ended, most of Camp Chase itself was dismantled, the last Union troops were those of the Veteran Reserve Corps. Some of the cabins at Camp Chase were used as cheap shanties for a few years. But for the most part, every indication that the military base had been there was gone - except for the graveyard, which was left to deteriorate. It wasn't until the 1890's that William H. Knauss, a private who had been injured on the battlefield at Fredericksburg, who had served in the 2nd New Jersey Regiment Infantry, and later served in the Veteran Reserve Corps, located the graveyard and determined to restore it. He held memorial services there, featuring speakers such as Governor Nash, and drew crowds of hundreds by 1898.

The early prisoners at Camp Chase were largely political in nature, and the majority came from Western Virginia.

When the Fort Donelson prisoners arrived at Camp Chase in early March of 1862, the Camp was still under the jurisdiction of the State of Ohio, despite being maintained by Federal troops. One of the reasons why Camp Chase would become a Federal Camp just weeks later was because of the massive amount of prisoners from places like Fort Donelson and Island #10. Many of the junior officers taken at Fort Donelson and incarcerated at Camp Chase would leave for Johnson's Island starting in the third week of April of 1862. There were at least 160 buildings at the camp, giving it the appearance of a sizable town.

The camp served other functions while it housed captured Rebel soldiers. Units were mustered into regiments there, and regiments that had finished their service were discharged. Union POWs released from Confederate prisons were processed through Camp Chase. Among the Ohio Volunteer Infantries based there were three future presidents: Lieutenant Colonel James Garfield, who served in the 42nd OVI, and Major Rutherford B. Hayes and Private William McKinley, who were both part of the 23rd OVI. 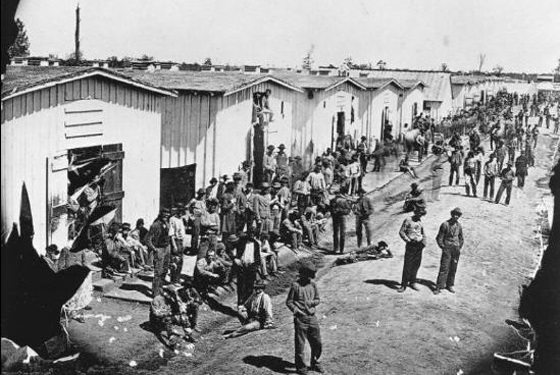 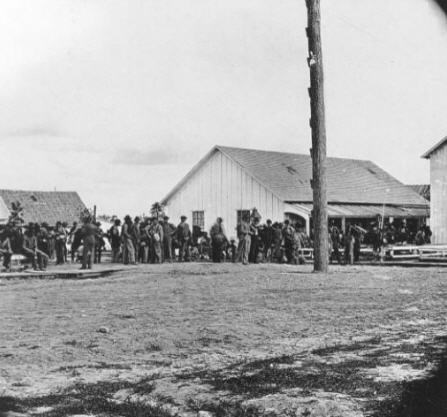 There were many political prisoners at Camp Chase, especially early in the War.

Many of them came from Western Virginia and Kentucky. At times the entire male populations from the households were taken to Camp Chase, as was the case for the Galford family from Taylor County. (now West Virginia). All three Galfords were arrested and taken to Camp Chase: the grandfather, son, and grandson who was 17 years old. The grandfather, Thomas Galford, who was well into his 70's, died at Camp Chase, making him the oldest prisoner to die there. As with all civilians who died at Camp Chase before August 1, 1863, they have no tombstones at the cemetery. At least one mother and daughter from Tennessee were also held as prisoners at Camp Chase for a period in 1863.

There were many reasons for the high death rates at almost all Northern prison camps including Camp Chase in 1865.

Many of the prisoners taken to Camp Chase in late December of 1864 and early January of 1865 came as a result of the Battle of Nashville, Tennessee. The Confederate Government had trouble keeping its army fed and clothed near the end of the war. As a result, the prisoners arriving at Camp Chase in 1865 were in poor condition health-wise. The winter of 1864-1865 was extremely cold. Prison policy at Camp Chase was for each prisoner to report for roll-call each morning and stand while a prisoner count was taken. Many in bare feet had to stand on ice and snow while they were counted. The penalty for not attending roll-call was no food for the day. With only one blanket per prisoner and no heat at night, the conditions for the prisoners at Camp Chase in 1865 were brutal. Although the North had plenty of food to give to the prisoners, their concern was that a healthy prisoner might become an escaped prisoner. Therefore, the Confederates were given just enough food to barely survive. With the news of the Union deaths at Southern prison camps such as Andersonville, little sympathy was given to the Confederates at Camp Chase. 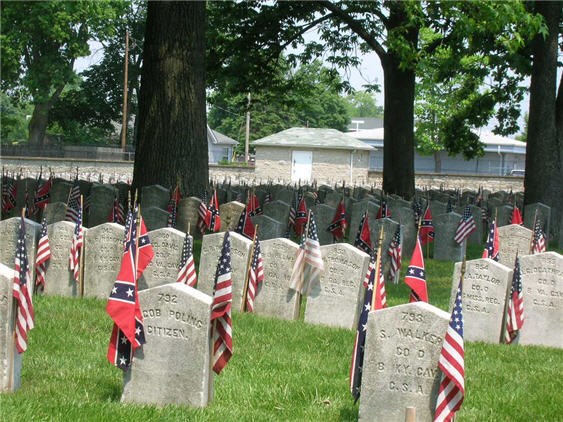 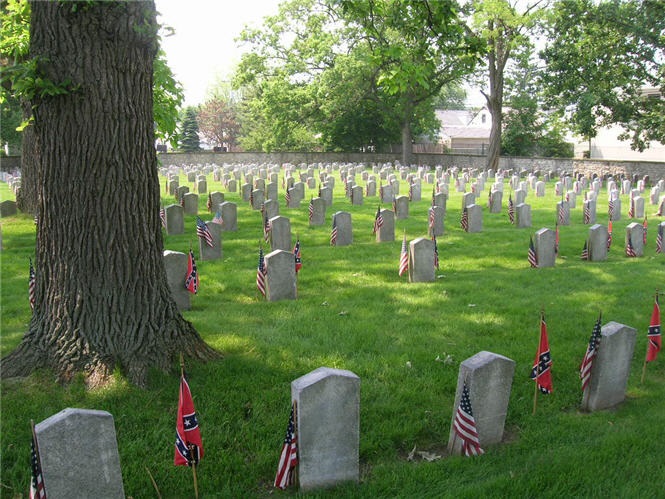 Some abbreviations on Camp Chase tombstones

Judge David F. Pugh, a former enlisted soldier with the 46th Ohio Volunteer Infantry (O.V.I.), made the following quote in his speech at the 1896 Camp Chase Confederate Cemetery memorial. In the compilers opinion, the 46th O.V.I. suffered more casualties than any other Ohio Infantry regiment during the war. Four years later, in 1900, a vote was taken by surviving members of the 46th O.V.I. concerning the return of a captured Confederate battle flag belonging to the 30th Regiment, Louisiana Infantry taken during the Atlanta Campaign. The flag was given back to former members of the 30th Louisiana in Worthington, Ohio, and was one of the first flags returned by an Ohio regiment. Many members of the 46th O.V.I. were from Franklin County, Ohio.

"Carrying two wounds made by Confederate bullets, I am perfectly willing that their graves may be decorated, and even to participate in it when their survivors are not numerous enough to do it. I am willing to admit that their heroism is part of our national heritage."

Source: The Story of Camp Chase by William H. Knauss pages 16 and 17. 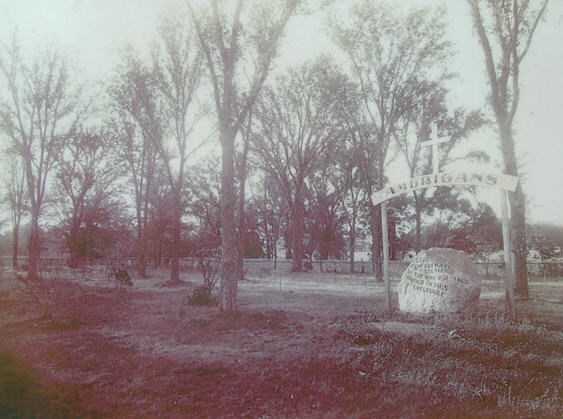 A squad from the barracks fired a salute and barracks buglers sounded "taps." Karl Hoenig and a boys' choir sang. Captain N.J. Kidwell of 345 South Third Street, who was a Confederate veteran of the Eighth Virginia Infantry in Pickett's division, presided.

The exercises were held in a new cement pavilion erected by army engineers from the barracks, representing five Northern and four Southern states, under the command of Captain F. M. Doyle. It replaces a wooden structure built several years ago. Rain interfered with the program before its completion. An American flag was placed on each grave by the Daughters of the Confederacy. The pavilion was decorated with flags, bunting, and magnolia wreaths."

The marble tombstones were first brought to the Camp Chase Cemetery by rail via horse and wagon from Columbus, Ohio, in the spring of 1908. The winning bid was given to the Blue Ridge Marble Company from Nelson, Georgia for $2.90 per stone. From these same quarries came the majority of the marble monuments we now have in Washington, DC, including the Lincoln Memorial.

The following are extracts from the Columbus Dispatch on April 13, 1902. “The arch which will be unveiled June 7 will be the first to be constructed by Northern people to mark the final resting places of Confederates who fought bravely for their convictions. It will be situated seventy-five feet from the entrance to the grounds, which fronts on Sullivan Avenue. Several years ago Colonel Knauss had a wooden arch placed over the bowlder and on it was painted “”Americans.”” “On top of the keystone of the arch is the statue of a Confederate soldier in gray bronze. On each side of the arch there are large flower urns, which set off the masonry in a very pleasing manner.” 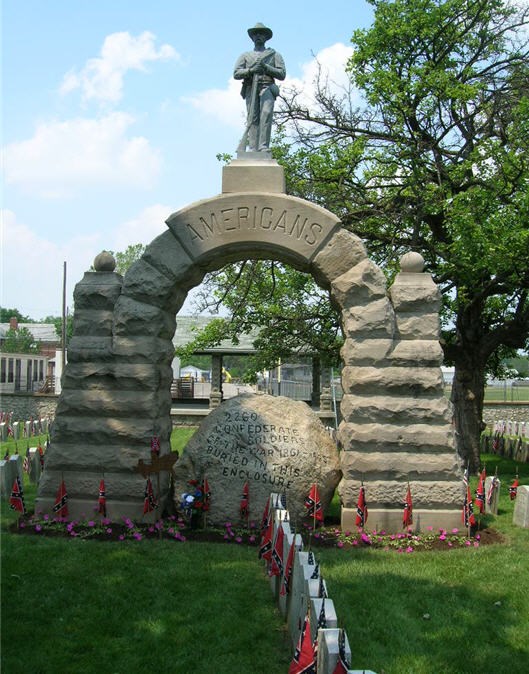 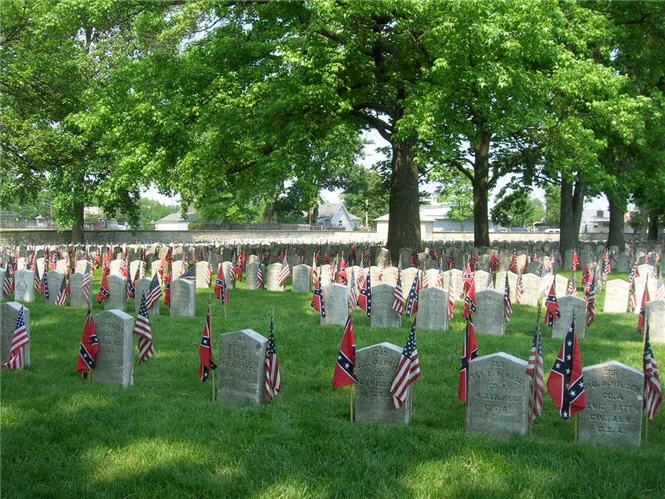 Each year on Memorial Day, the Columbus' Brig. Gen. Roswell S. Ripley Camp 1535 of the Sons of Confederate Veterans and the United Daughters of the Confederacy honor those heroic souls who gave all in the struggle for Southern Independence. 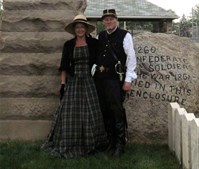 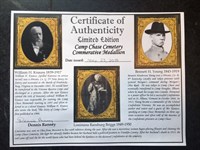 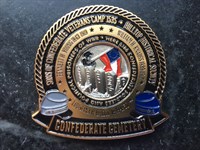 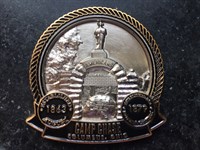 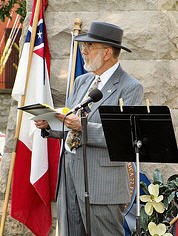 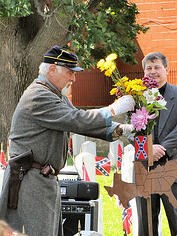 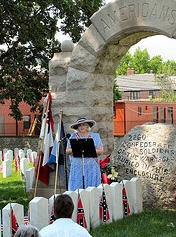 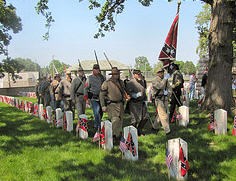 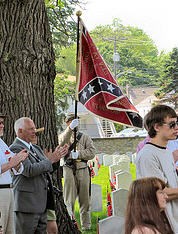 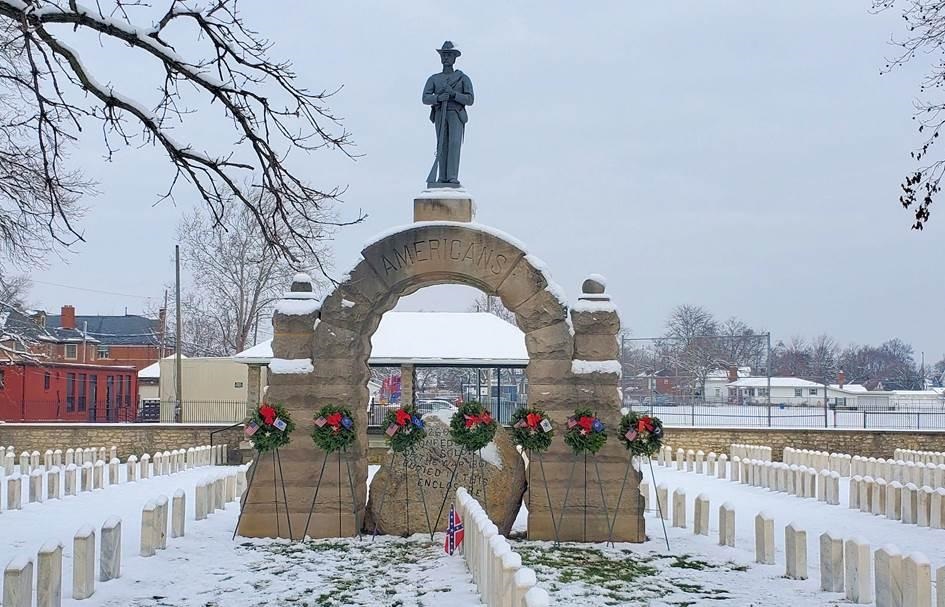 • The following speech about three soldiers buried at Camp Chase was given in June 14, 2015 by Monty Chase during the Hilltop Historical Society's Camp Chase Memorial Service.

• The soldier behind the legend of the "Lady in Grey:

• The Captain and His Sergeant

• The Engagements Before, During And After Utoy Creek, Georgia - Extracts taken from biographies of Camp Chase

• 616 Days: The Story About the Confederate Statue

• The Lady Behind the Veil: The Life of Louisiana Ransburgh Briggs

• A Missing Grave and Tombstone at the Camp Chase Cemetery

• Listing of Names: Alphabetical and by Rows

• Civil War Soldiers Buried AS Confederate May Actually Be Union

• Map of the Camp Chase Cemetery

• Augustus and William Beckmann of Texas

• Confederate wounded and sick brought to Camp Dennison from Shiloh on the USS Magnolia on April 17, 1862

• The complete story of the Camp Chase missing letters

You can email us at dennis_brooke2001@yahoo.com