James Ogburn Norton, Sr. was born Nov 23, 1825 in North Carolina to Dr. William S. and Marcia Anne (Beall) Norton. While still a small boy, his parents migrated to Middle Tennessee settling in Bedford County, south of Beechgrove, and were neighbors of the Obadiah Templeton family according to the 1830 Bedford Co. census. James married Elizabeth Priscilla Davidson, of Bedford Co., in Jan. 1854. In the 1860 census, James was recorded as being a physician, just as his father. Physicians during the 1840′s & 50′s often were trained for a period of time, usually one year, under an established practicing doctor. A final year was often spent at a medical school before receiving a medical diploma or license. It has been suggested that James studied under his father, but It is not known where Dr. Norton received any of his training. He and his wife had 4 children; sons, William Alexander, born in Jan, 1855, and Leander Newton, born in Dec, 1856, a daughter Sarah Elizabeth, born in June, 1859, and their father’s namesake, James Ogburn Norton, Jr, born in Jan, 1861. Tragically, their father had only a little over a year to live after this last child’s birth.

Not long after war began, Dr James Norton was mustered into the Confederate States of America service in November 1861, at Camp Trousdale, Sumner Co., enlisting for twelve months. As the war began, 1st Lt. Dr. Norton was serving in Co K, 32nd Tennessee Infantry Regiment. Some military records indicate he served in Co. F, also. His service was doomed to be of short tenure, however. The 32nd Tennessee Regiment was among the 12,000 Confederates captured after the Union’s first major victory of the war, the Battle of Fort Donelson. (Feb 11- 16, 1862) The loss of Fort Donelson opened the way for the Union’s invasion of Middle Tennessee and the capture of Nashville. Thus, James Norton arrived as a prisoner of war at Camp Chase, in Columbus, Ohio on March 1, 1862. He must have been sick when he first arrived since he died of pneumonia in the Confederate hospital only three days later on March 4.

The tragic story of Dr. Norton does not end with his death, as was discovered by researcher Dennis Brooke, member of the Gen. Roswell Ripley Camp Chase (Columbus, OH), Sons of the Confederate Veterans, Camp 1565. A single wooden head board, which read only “Dr. James O. Norton” was placed over his grave in East Cemetery. Not being designated as a Confederate soldier, was something that turned out to be a blessing AND a curse. The Confederate Cemetery was located next to Starling Medical College. In a twist that would make Edgar Allen Poe proud, a local physician, named Dr. Joab Flowers, was stealing the bodies of dead Confederate soldiers from East Cemetery (then later from the Camp Chase Confederate Cemetery) and was selling them at a handsome price to the medical college! Dr. Flowers was later arrested for body snatching in Nov, 1864. Had Dr. James Norton’s body been correctly identified as “1st Lt.” Dr. James Norton, then he might have also become one of the infamous body snatching victims of Dr. Flowers.

In May, 1869, all Confederate dead were moved for re-interment in the Camp Chase Confederate Cemetery, but Dr. Norton was not recorded as receiving this military burial and was apparently left behind. When the remainder of the East Cemetery was moved in 1881 (this being done to cover up evidence from the 1864 body snatching scandal) the first area moved was the section of the graveyard where James Norton had been buried. Since the old wooden markers had long since deteriorated away it is believed that Dr. Norton was possibly buried in the mass grave along with other unidentified Confederates, all of whom were quickly forgotten without grave markers or headstones.

Recently, the General Roswell Ripley SCV Camp of Camp Chase, Columbus, Ohio, made a “In Memory of” marker, to recognize the life and service of Lt. James O. Norton, C.S.A. It was decided by their SCV camp to make this marker available to a family member of Lt. Norton’s ancestral home. Dr. Norton’s memorial marker was brought from Columbus, Ohio to Bedford Co. by Greg Keeling, a distant double cousin of Lt. Norton. This stone was placed in the Confederate Cemetery at Willow Mount by Mr. Keeling and members of the local S. A. Cunningham SCV Camp 1620. 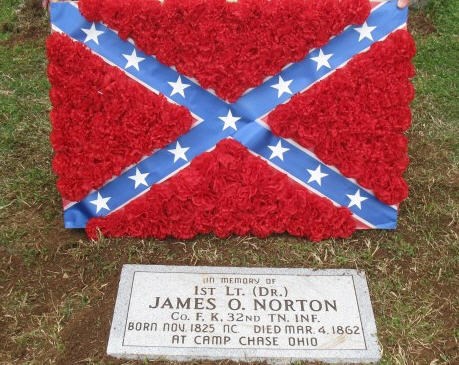