The Lady Behind the Veil: The Life of Louisiana Ransburgh Briggs

Mrs. Louisiana Ransburgh Briggs (Dec 10, 1849-Feb 26, 1950), often referred to as “the Grey Lady of Camp Chase”, did indeed wear a veil to conceal her identity as she clandestinely adorned the soldiers’ graves at the Camp Chase Ohio Confederate Cemetery with flowers. Afterall, her husband, Joseph M. Briggs, had served as a Union soldier and a Franklin County Commissioner, if Mrs. Briggs had been recognized during her commemoration activities, there might have been embarrassment to her family and the newspapers might have reported her actions as negative press. Even in Louisiana’s day, long after the War had ended, there were still strong residual feelings concerning the North and South.

It could be argued that Louisiana’s contributions to her family and fellow countrymen were much more significant than suppositional allegations of her being the “spiritual apparition” at the Camp Chase Cemetery. Possibly the closest she ever came to being an “apparition” was one Halloween when she held a party in her home for her six-year-old grandson, James B. Cheney, who she was raising, and his school chums. Louisiana, who was 77 years old at the time, wrapped herself in white bed sheets, put on a pie crust facial mask and slid down the stair banister, all the while screaming a quivering falsetto voiced “WOOOOOOO!!”. Years later, Jim Cheney related that his grandmother used this ghostly appearance to help him, and his classmates get to know each other in a fun atmosphere. Mrs. Briggs was of the opinion that in order to achieve a good learning experience, school had to be a happy place.

According to legend, Louisiana was supposedly in love with Private Benjamin F. Allen of Company D of the 50th Regiment TN Infantry.  Even if the romance had started in 1864, Louisiana would only have been 13 years old, and Benjamin would have been about 31 years of age. The geographical distance between the two supposed lovers would have been nearly 116 miles. Benjamin Allen was living in Stewart County, TN and Louisiana Ransburgh in New Madrid, MO.  It appears the alleged love affair between Louisiana and Benjamin was the result of a newspaper reporter trying to promote the Camp Chase Cemetery.

According to obituary accounts Louisiana was relocated to Columbus, OH in 1864. Private Benjamin F. Allen per the Compiled Military Service Records arrived at Camp Chase on March 26, 1864 and had been wounded in the left leg. His capture occurred at Missionary Ridge, TN in November 1863. However, Louisiana did attend the Ohio Wesleyan College located in Delaware, OH some 25 miles distance from Columbus, OH. Private Allen would expire at Camp Chase from pneumonia on September 8, 1864 and be buried under tombstone number 233.

Even though her life had tragedies and triumphs, perhaps her most difficult year personally was 1913, aside from the great Ohio Flood, when she would lose her son and her husband in separate incidents. Some historians viewed the 1913 flood in Ohio as the worst catastrophe in the history of Columbus. The flood took at least 93 lives in March of 1913. The flood did exceptional damage in the area of Columbus called the Bottoms. To the west of the Bottoms was the area known as the Hilltop. The Camp Chase Cemetery was and remains to this day in the Hilltop area. Families and children were frantic in their pleas for help as the extremely cold flood waters continued to rise. Among the few heroes of the flood was Joseph Merton Briggs in his attempts to rescue victims from the flooding waters.

Joseph Merton Briggs was the second child of Joseph and Louisiana Briggs. Born in 1873, Joseph Merton Briggs entered the Spanish American War as a hospital steward in the 10th Regiment OH Infantry. Shortly after enlisting, young Briggs married Ethel in October 1904. (Spelled as) Merton Briggs in the 1910 census was noted as being a traveling salesman and owned his own home free and clear and living with his wife.

The following is from the Cincinnati Enquirer on March 31, 1913:

“J. M. Briggs, aged 80, wealthy resident of Briggsdale and former County Commissioner was found and notified of the death of his son, Merton Briggs, who died after he had brought two score to safety. Mr. Briggs was heartbroken over his loss and his death is feared. The family was one of the most prominent of the afflicted city. Mr. Briggs was an alternate in the Democratic National Convention at Baltimore.”

“Joseph M. Briggs, 80, of Briggsdale, former Franklin County commissioner died at Mount Carmel hospital Sunday from injuries received Saturday evening when a Grove City car on the Ohio Electric crashed into a buggy in which he and Theodore Connors of Briggsdale were riding at Glenwood Avenue and West Mound Street. Mr. Connors had his right eye torn from its socket and suffered other severe injuries. He is now in Mount Carmel hospital. He was formerly assistant superintendent of the county infirmary.  The body of Mr. Briggs will be sent to Briggsdale Monday for funeral services at 1:30 p.m. Tuesday at the residence. He was a lifelong resident of Briggsdale serving two terms as county commissioner.  It was Mr. Briggs son, Merton J. Briggs, who lost his life while doing recue work in the March flood.”

From the Greenville Daily Advocate February 27, 1950:

“Services will be held tomorrow for Mrs. Louisiana Ransburg Briggs 100-year-old resident of nearby Briggsdale who died in a hospital here yesterday. Mrs. Briggs came to Columbus in 1864 from Madrid, Missouri and attended Ohio Wesleyan University. She was married to Captain Joseph Briggs of the Union Army in 1867." (The compiler notes with other obituaries that Mrs. Briggs died at the Mount Carmel hospital, the same one her husband had died at some 37 years earlier).

So, the Lady in Grey was real and was a fine example of Southern womanhood by paying homage to the brave warriors who fought for their beliefs and died at faraway Camp Chase. 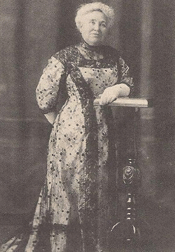