Another descriptive list accompanies the obligation paper taken home by the prisoner, which tallies with the one retained at the prison. Sometimes rations were furnished to departing Confederate prisoners.

Included is a rare photograph of a travel pass from Camp Chase, Ohio. After being released from prison the Confederates were sometimes offered a travel pass back to their homes or as close to it as possible. It was by no means mandatory and after the travel pass was used it was worthless which might explain why they are so rare. In this particular case the former Camp Chase prisoner was taken by rail to about a dozen miles from his home. With the destruction of many railroads in the South during the war it could make traveling by railroad an impossible journey.

As Mr. Hugh Simmons pointed out to me years ago……”General Orders Number 85 (8 May 1865) directed that all Confederate POW’s being held in POW camps who had asked to take the Oath prior to the fall of Richmond (2 April 1865) were to be released upon taking the Oath and allowed transportation to a point nearest their home. These men took the Lincoln Amnesty Oath.

General Orders No. 109 (6 JUN 1865) directed that all Confederate POWs from the rank of army captain down still being held in POW camps be released upon taking the Oath of Allegiance. Majors and up in rank had to apply directly and individually to the President for a pardon. Under G. O. #109, the men first took the military Oath of Allegiance and then, if they requested, they could take the Johnson Amnesty Oath. Transportation was allowed to a point nearest their homes.

The transportation allowance was not out the goodness of the Yankee heart! It had a purpose. That purpose was to get these ex-Confederates soldiers back home, out of uniform, and on their farms so they would be less likely to offer further resistance to Federal authority. It was not in the Federal interest to have a mass of paroled Confederates wandering about the northern country side in search of food while en route home.” 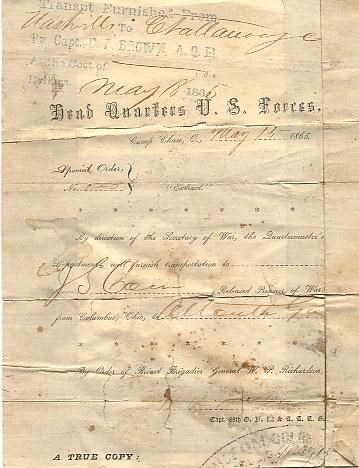