By late spring of 1865 the gates of Camp Chase opened and those Confederate prisoners who had signed an oath of allegiance were allowed to leave. Those too sick to leave were held at the Camp Chase hospital.

The United States War Department provided transportation to those held at northern POW Camps. Those Confederates who had surrendered in the field were not supplied with travel passes.

The compiler acknowledges some Confederates with their left hand raised to take the oath may have had their right hand behind their back with a couple of fingers crossed or a similar analogy including making their signature with a X even though they could write their name therefore claiming they never took the oath or signed their name. If a Confederate did not take the oath they would not be released and nobody wanted to linger at Camp Chase or any northern prison camp any longer then they had to. The compiler notes the 88th Ohio Volunteer Infantry had been primary guards at Camp Chase and they were mustered out of service at Camp Chase on July 3, 1865 and after they left components of the Veteran Reserve Corps largely took over the duties of the 88th Ohio.

Once a Confederate had walked through the gates of Camp Chase they were free to go whatever direction they chose including living in Columbus if they so desired. They did not have to take the travel pass but one was provided to them should they elect to use it. The Confederates were released in stages and as a rule the Confederates living the longest distance were released first. In this scenario it would have been the Confederates from Texas. As far as the compiler can see this was a general rule of thumb and no documentation can be located at this time to confirm this release pattern concerning the first released were those who lived the longest distance away.

Travel passes are fairly rare and this one belonged to Private Cain supposedly of the 42nd Georgia Infantry which was found on the internet. Looking carefully at the pass it would seem that Private Cain after released from Camp Chase probably walked to the Columbus, Ohio railroad depot about four miles away and presented his travel pass and left on a train bound for Louisville, Kentucky. It further appears he went to Nashville, Tennessee and probably to Chattanooga, Tennessee and then took the Western & Atlantic railroad to Atlanta, Georgia and then walked a few dozen miles or less to his home as he was from the Atlanta area. Interestingly since he was taken prisoner during the Atlanta Campaign he would follow the same route home that had taken him to Camp Chase where he was captured.

Even more telling is the document at www.fold3.com stating that J. S. Cain took the oath of allegiance at Camp Chase on May 15, 1865 and Federal authorities reported his unit as Captain Corput’s Georgia Light Artillery. And a physical description was made. Residence Gwinnett County, Georgia; Fair complexion; Dark hair; Blue eyes; height is 5’ 11” and he was taken prisoner on July 24, 1864 during the Atlanta Campaign by the 23rd Army Corps. And it was also noted he was on a roll of prisoners of war released at Camp Chase on May 15, 1865 as per General Order number 85, dated May 8, 1865. The compiler also notes his unit was known as Captain Max Van Den Corput’s Company, Cherokee Light Artillery. The compiler notes he may have been with the 42nd Georgia Infantry a short time and then transferred over to the Georgia Light Artillery but the missing link to him doing so cannot be found on his paperwork. Travel passes were kept by former Confederates only as mementos and had no significant importance.

Because of the destruction of the railroads in the South some soldiers may have had to walk further than others. There are many stories of the people of Louisville, Kentucky and Nashville, Tennessee giving away blankets and food for the needy Confederates.

The last Confederates to die at Camp Chase did so in August of 1865 at the Chase hospital. On March 16, 1866 the last entry for prisoners at Camp Chase was entered in a prison log book found at the National Archives. Four Union guards were guarding two Union prisoners at Camp Chase. Recorded were their equipment two rifles, one lock, one key and one pair of handcuffs and one ball and chain. 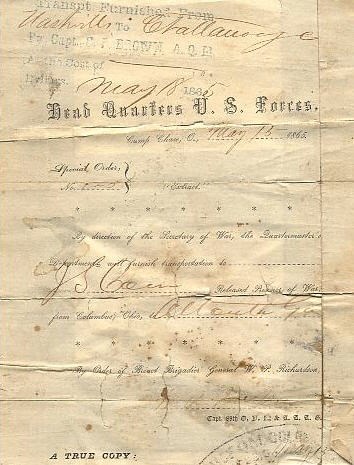