Private Michael Spence was born in England and entered the Confederate Service at Millwood; Clarke County VA., on June 20, 1863 with Parker's Light Artillery. He enlisted for the duration of the War. He was present during the battle of Gettysburg, PA and participated at Pickett's Charge. A few of the artillery units made the charge however it is not known if Private Spence made the charge with the army or if he stayed behind with the Confederate artillery barage. Private Spence was present with his unit until his capture on April 6, 1865 near Hatcher's Farm, Virginia with the exception of being in the hosptial for fever at Chimbroazo in Richmond, Va during September and October of 1864.

He would arrive at the Federal Prison at Point Lookout, MD., on April 14, 1865 the same day as the Lincoln assassination. He took the oath and was released from prison on June 20, 1865. Michael Spence had fair complexion and brown hair with blue eyes and stood 5'7" in height. From Point Lookout he was furnished transportation back to Winchester, VA. Because of the terrible conditions at Winchester, VA., he decided to live with some relatives in Columbus, Ohio where he would become a resident. He was a member of the Confederate Veterans of Columbus, Ohio and went to the Camp Chase Memorials until his death in 1913. Private Kidwell of the 8th Virginia Infantry was the Confederate Veterans leader in Columbus, Ohio and was a pall bearer at his funneral. Private Spence died a poor man and without a grave marker.

The Brig. Gen. Roswell Ripley Camp of the Sons of Confederate Veterans in Columbus, Ohio provided a marker for his grave where he is buried in Greenlawn Cemetary on the west side of Columbus.

"Michael Spence, Who Fought With Confederates at Gettysburg, Died Saturday."

"Michael Spence for forty years a resident of Columbus, who died Saturday, will be buried at Green Lawn Cemetery Monday afternoon. Funeral services will be held at 1:30 o'clock at the King Avenue Methodist Episcopal church. Mr. Spence had been sick for three years with locomotor ataxis, and was 71 years of age at the time of his death. He was born in Winchester, Va., and remained there until the end of the Civil War, during which he was in the Confederate Army, serving in the Virginia Artillery at the time of General Pickett's charge at Gettysburg."

"A Columbus (Ohio) paper reports this Confederate Veteran now at rest. It states that he was member of Parker's Confederate battery, Pickett's Divison. Rev. Dr. Campbell preached the funeral. "Typical of the good feeling now between the soldiers of the North and South, three ex-Confederates soldiers (Kidwell,Humphreys, and Worrell) and three ex-Union soldiers (Craig, Cratty, and Pugh) acted as pall-bearers. Little girls in white served as a vanguard." Mr. Spence was unable to attend the recent reunion at Gettysburg and his wish that he might hear from some of the comrades with whom he had fought 50 years ago was ungratified. He watched the proceedings at Gettysburg, however, very carefully and these afforded him much interest and amusement in his last days." 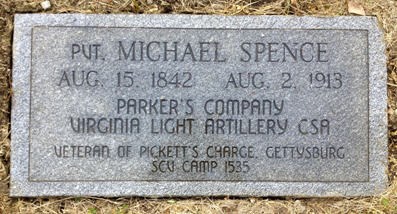